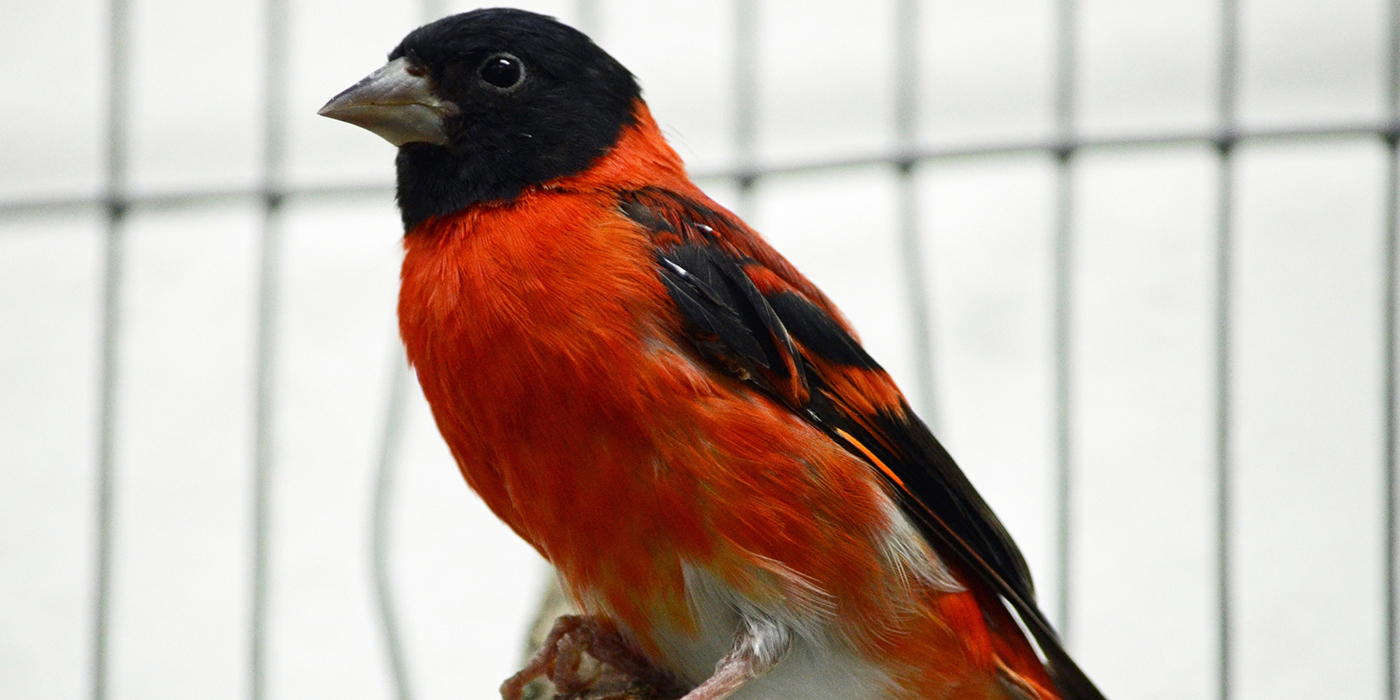 Scientists across the Smithsonian National Museum of Natural History (Washington) are working together to save the Red Siskin, an endangered fiery-red, seed-eating passerine bird from South America threatened by the pet trade and habitat loss. Researchers at the Smithsonian and the Smithsonian Conservation Biology Institute (SCBI) in Front Royal, Virginia, together with partner institutions led in Venezuela by NGO Provita and in Guyana by the South Rupununi Conservation Society, aim to create self-sustaining wild populations across the historic range.

Since 2015, animal care staff at SCBI have been developing best practices in animal husbandry unique to this species: to determine the right diet, the right nesting material, how best to breed the birds, house them, weigh them, care for their young, even how to train them to be wild. Historically, there has been limited understanding about red siskins’ nutritional needs in the wild, so the animal care team is analyzing how different combinations and amounts of food items affects the birds’ plumage coloring, weight and reproductive success.

In addition to providing best practices in husbandry protocols based on research with the colony, SCBI’s animal care team is helping to develop a studbook and integrating innovative molecular tools to manage the genetic diversity of the birds under human care. SCBI will also play a pivotal role in developing a strategic plan for reintroducing the bird to the wild.

The Red Siskin, which features prominently in Venezuela’s national identity, is considered one of the most endangered bird species in the world. In 2000, a previously unknown population of Red Siskins was discovered in southern Guyana during biodiversity surveys led by Smithsonian and University of Kansas researchers. The Red Siskin Initiative aims to help protect this stable population through community-based conservation, in addition to restoring sustainable populations in Venezuela. The project approaches conservation of the species comprehensively: using genomic and ancient DNA techniques for genetic monitoring and management, studying ecology and natural history in the field, identifying appropriate release sites, mitigating wildlife trafficking, and protecting and expanding habitat, which includes shade coffee farms certified as bird friendly through the Smithsonian Migratory Bird Center.

Australia is part of the Red Siskin Initiative through direct funding support and provision of advice on captive breeding from the National Finch and Softbill Association , Save the Gouldian Fund and efforts of Australian breeders to define optimal breeding conditions with which to advise the Smithsonian and Venezuelan breeding centres.

Given the unstable political situation in both Venezuela and Guyana this is going to be a very difficult conservation effort.

Join online and enjoy finches with us.

Send us a message: